Dr. Leo Bustad was one of the founders of Pet Partners (then called Delta Society). His influence on the field of animal-assisted interventions was major, going beyond his role in founding our organization. In this guest post, Dr. Alan Beck shares some thoughts on Dr. Bustad’s influence and his memories of the man who coined one of the most important terms in our field.

This post was originally published by Purdue University Press and is republished here with permission. Our thanks to Purdue for allowing us to republish this post, and to Dr. Beck for sharing it with us.

Guest Post:
The Impact of a Monograph:
The Origin of the Expression the “Human-Animal Bond”
and the Importance of Compassion
by Alan M. Beck, ScD 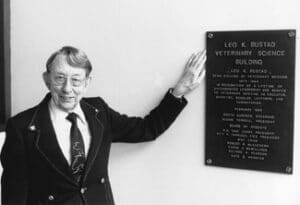 I first met Leo Bustad around 1978, when he was the dean of Washington State University’s College of Veterinary Medicine, where he served from 1973 to 1983. His varied experiences as an accomplished scientist and educator, 15 months in a German prison camp, and his long-lasting marriage gave him a wonderful perspective on life. He passed away in 1998 at age 78.

As an academic leader with a wonderful sense of humor, he was a sought-after event speaker. His speeches were not just appropriate little talks, but thoughtful, well-referenced essays exploring major issues worthy of discussion and further contemplation. There were many reasons that they should be available for further reading and so were compiled in books, the last of which was published in 1996, Compassion: Our Last Great Hope.

The speeches in Bustad’s Compassion address such issues as the college curriculum (compared to the saber-toothed tiger for its unchanging character), nurturing children, the Holocaust, the art of listening, freedom and responsibility, grief, writing your own eulogy, and the importance of animals to the well-being of people. Humans’ relationship with animals was a major part of his life, and his writings triggered a movement in both veterinary and human medicine. 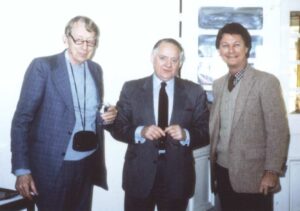 Leo Bustad (L) and Michael McCulloch (R) with an unnamed individual at a Delta Society meeting. From the Pet Partners archives.

Together with psychiatrist Michael McCulloch, they developed the Delta Society, which is now Pet Partners, to foster research on the value of our relationship with animals; indeed, Bustad coined the expression the human-animal bond. He shamelessly borrowed the wording from the often-discussed mother-infant bond. Both bonds indicated a relationship that is essential and mutual. It took a strong collaboration of a leading veterinarian and a respected physician for society to look past the biases in both fields. This was long before the present concept of One Health. The chapter on animals in Bustad’s Compassion ends with a quote from McCulloch: “If pet therapy offers hope for relief of human suffering, it is our professional obligation to explore every available arena for its use.” 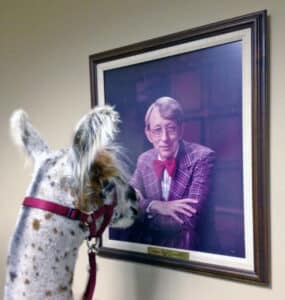 In the last chapter Bustad discusses the scholars who believe the world’s greatest resource is compassion. As he notes, “Compassion is not merely feeling or sentiment, but actively helping to relieve pain and suffering in others.” He shares his sadness that this great source of energy remains relatively unused, unexplored, and unwanted. He argues that we should make compassion not a religion, but a way of life. We are reminded that Hebrew Scriptures note that God chose Moses to lead his people only when he observed how much compassion Moses had for his animals.

Bustad’s writings are well worth the read and the fresh considerations the text will promote. The life’s work of the author illustrates the importance of humans and animals to one another, as does this book—the indelible bond we share, the opportunities presented by these connections, and the empathy that unites all creatures. Bustad ends the chapter with “Everyone who is in need of help is my brother and my sister. That’s compassion.”

ALAN M. BECK received his Doctor of Science (Sc.D.) in Animal Ecology from The Johns Hopkins University School of Public Health. He has studied the ecological and public health implications of dogs and the health benefits of animal contact.
Beck directed the animal programs for the New York City Department of Health for five years, and then was the Director of the Center for the Interaction of Animals and Society at the University of Pennsylvania, School of Veterinary Medicine for 10 years.
Dr. Beck is now the “Dorothy N. McAllister Professor of Animal Ecology” and Director of the Center for the Human-Animal Bond at Purdue University, College of Veterinary Medicine, West Lafayette, Indiana.